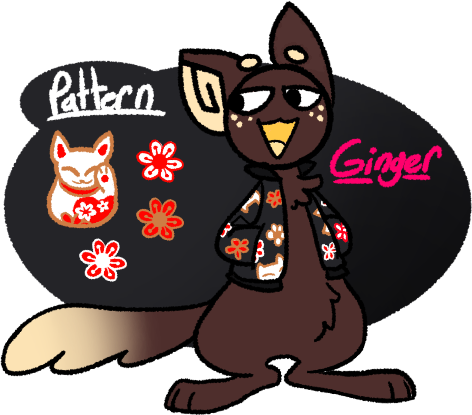 Empathetic - Goofy - Distractable
Ginger is silly, kind, and makes their presence known when they're around. The hard part is just getting them to actually be around. While not 'shy', Ginger sucks at initiating contact with people, and mostly just sticks with Magpie and Nutmeg all the time, usually either doodling nearby or teasing Magpie somehow.
- Freckles can either be plain yellow or shiny/sparkly gold. Only the freckles though, the other yellow parts are just yellow.
- Blue eyes with a slight gold ring around the pupil.
- Doesn't usually wear pants, can be put into any shirt or jacket though.
- Doesn't have to be a Pine Marten, they can be drawn like any sort of mustelid, as long as it's one with the noodle body shape
- The Sona I usually use for shitposting

MAGPIE [Friend]
Magpie is kind of a fucking downer dude. But someone's gotta keep the bitch going, and Nutmeg certainly isn't doing well in that department. NUTMEG [Friend?]
Ginger doesn't really have an opinion on Nutmeg. They're just sort of there. Giving off...energies. But they will make NSFW jokes together frequently.